Founded by Bill Cromer in 1981, William C Cromer Pty Ltd is a Tasmanian-based consultancy with a depth of experience and (dare I say it?) unmatched quality, providing a diverse range of professional services in the fields of engineering geology, geotechnical investigations, soil testing, domestic wastewater and groundwater.

Bill is the creator of Trench®, a highly regarded industry-standard software package for domestic wastewater management. He designs, manufactures and distributes the Cromer Constant Head Field Permeameter for soil testing, and, for professionals, students, regulators and researchers he is currently developing a range of downloadable calculators in the fields of hydrogeology and surface water hydrology.

I was born in 1948 in Hobart, the capital city of Australia’s island state Tasmania. In my teen years in the seaside town of Taroona, I attended the local high school and discovered a love of tennis, writing (a school science magazine) and astronomy (building a Newtonian reflecting telescope).  But at Hobart High School in the mid 1960s, it was geology which grabbed my academic attention. I graduated with Honours in geology from the University of Tasmania in 1971, married physiotherapist Hilary Watts in 1973, wrote A History of the Cromer Family in Tasmania from 1855 (1975), and spent the decade helping to raise two daughters and learning groundwater and engineering geology with the Tasmanian state government’s Department of Mines.

In 1981, I resigned from the Department of Mines, and started William C Cromer Pty Ltd as a one-man consultancy offering geotechnical, engineering geology, groundwater and wastewater design services. In this decade, I got involved with petroleum geology and spent consultancy time on an off-shore oil rig and in New Zealand. I started up, and later sold, a sideline business called The Water Connection which designed and installed domestic watering systems. With a geological colleague and on behalf of private backing, I acquired Australian and international gold exploration licences and was all set to float on the stock market when it crashed in the late 1980s. About the same time, I graduated with a Diploma in Business Management from the University of Tasmania, and, as editor and compiler, published The Tasmanian Book of Lists (1989).

In 1990, with two daughters starting high school, the lure of a steadier and more predictable income beckoned. I teamed up with environmental consultant Jim Stephens as a salaried Senior Consultant at Jim’s Environmental & Technical Services. In an unconnected event, our son was born. For the next decade, I gathered extra professional experience and networks in engineering geology, groundwater, wastewater, contaminated sites and environmental management, and, towards the end of the decade, compiled the computer application Trench® for wastewater management, and designed a soil testing instrument (a permeameter).  Trench® quickly became an industry standard in Tasmania, and, like the permeameter, is still sold and used throughout Australia. In the mid-1990s, early morning forays at the computer produced my first (and so far, only) novel, but I delayed publishing Thylacine Conspiracy until 2003. The book remains on sale in selected Tasmanian outlets and is also available online.

When my parents celebrated 50 years of marriage, I compiled a biography (Dancing with You, 1998).

With now-adult daughters (but young son), I resigned from Environmental & Technical Services in 2000 to revive my original company – offering the same broad services, but this time with an older, wiser and more experienced eye.

In 2015, I am redesigning and repackaging my Cromer Constant Head Field Permeameter, and upgrading Trench®, for the global market. I am also developing a range of hydrological and groundwater calculators for general use.

All three children have fled the nest, but geological consulting, a busy private physiotherapy practice and grandchildren combine to keep me and Hilary busy. 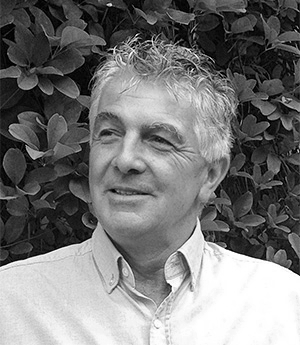